So it’s been quite a while since I wrote a ‘Hidden Treasures’ post. I’ve been so busy recently I’ve just about managed to type up my vocab lists but I’ve missed blogging about Paris! As a result, I’m a bit out of practice but here goes:

This post isn’t so much a ‘hidden’ treasure. It’s more of a treasure that people don’t visit as often as they should. The Palais de Justice is one of my favourite spots to see in Paris, is totally free and architecturally stunning inside and out.

It sits on Ile de la Cité, on the former site of Palais de la Cité, and is the court building that houses the High Court of Paris (the Tribunal de grande instance de Paris).

If you’re visiting the incredible Sainte Chapelle, below, or the Conciergerie (the old prison where Marie Antoinette was held captive before her execution) this is a perfect stop as they are all inter-linked and, while you have to pay to enter Sainte Chapelle and the Conciergerie, the Palais won’t cost you a penny. 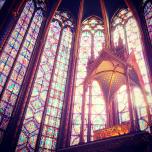 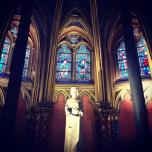 Downstairs chapel in the Sainte Chapelle 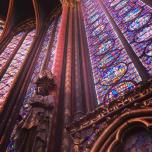 The royal palace that used to stand on this site was built in the 13th century and the famous tourist hotspots, Sainte Chapelle and Conciergerie were parts of that complex. They still form part of the Palais today but are destinations in their own right. The Palais de Justice as it is now was rebuilt between 1857 and 1868 and in the 1860s was recognised as the greatest work of art produced in France that decade. It was awarded the Grand Prix de l’Empereur and I can totally see why.

I went to visit it again earlier this year – partly because it features heavily in one of my favourite TV crime dramas, Spiral (called Engrenages in France). I wasn’t disappointed – I never am with this incredible place.

Although it is a much younger building than the Royal Courts of Justice in London, the grandeur and gravitas are comparable. Beautiful sculptures and engravings cover the facades and a broad staircase on the front courtyard (the Cour du Mai) leads to the main lobby.

The official website has some interesting statistics on the Palais and tells us that there are over 24 kilometres of corridors, over 3,000 windows and 4,000 judges, magistrates and workers on-site every day. 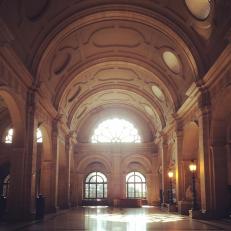 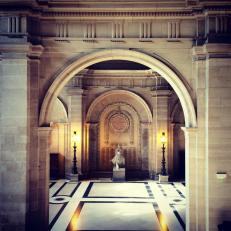 Inside, lawyers, notaries and administrators are going about their day to day work but if you can ignore the hubbub and focus on the beauty of the building, it’s one of the most peaceful places in the city.

Well worth a stop if you’re in the area to see Saint Michel, the Notre Dame or the awe-inspiring stained glass windows of Sainte Chapelle.