The Palais Galliera is Paris’ fashion museum. Throughout the year they hold amazing exhibitions about the world of fashion that Paris is so well-known for and when there is no exhibition, sadly the Palais is closed. What people don’t always appreciate is that the Palais has an awesome garden that is open all year around – exhibition or none. I went down there recently to have a look.

Information panel about the garden 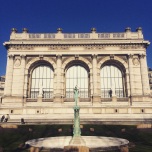 The gates to the gardens

The Palace has an interesting and troubled history. The land it is built on was owned by the Duke of Galliera until his death in 1876. The land and his worldly fortune were then transferred to his wife, the Duchesse de Galliera, Marie Brignole-Sale de Ferrari. The couple had spent many years amassing a considerable collection of art and, following the death of her husband, the Duchesse decided to use the land to build a museum that would house this collection.

She signed over millions of francs to the City of Paris on 30 August 1879 and construction began. Unfortunately, just seven years later, the Chamber of Deputies of the Third Republic passed a law expelling all persons who were descended from a dynasty that had at any time reigned over France. This included the Duchesse.

Understandably outraged, she changed her mind about her planned legacy but it was too late. The land and the money already belonged to the City. She still had her art collection though and she left it to the city of her birth, Genoa, Italy, when she died in 1888.

Having been designed to house a collection that it never saw, the museum opened as a temporary exhibition space in 1894. Since 1977 it has been known as the Musée de la Mode de la Ville de Paris (the Paris Museum of Fashion) and boasts a collection of over 70,000 items.

So, when there is no exhibition running, you can’t go inside. However, you can go to explore the grounds and the grounds are magnificent. 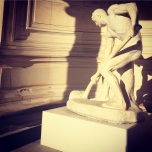 In homage to their marriage, the Duchess had ordained that the streets on either side of her new museum be named after her and her husband. To this day, the park and building are flanked by Rue Galliera and Rue Brignole. The official title of the park brings the two names together: Square Brignole-Galliera.

The museum was designed by the architect Paul-Réné-Léon Ginain in typical Beaux Arts style. The garden features sculptures by Just Becquet and Gustav Michel.

I visited on a crisp and sunny Saturday afternoon and the park was almost empty. It is a peaceful place, just a stone’s throw from the hubbub of Avenue du Président Wilson and the Trocadéro. It’s a great spot to take a picnic lunch with friends or to have a moment of quiet on a bench, admiring Ginain’s impressive designs and reflecting on the generosity of the Duchess who made the whole thing possible. There’s also a great view of the Eiffel Tower to be exploited by those with better photography skills than mine! 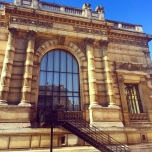 East wing of the Palais 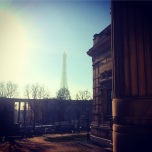 View of the Eiffel Tower

To find out much more about the Palais, the garden, the Duchess and their history, visit the official website or just head down to take a look. The closest metro stations are Iéna or Alma Marceau and it’s about a five minute walk from the Palais de Tokyo Modern Art Museum.