This isn’t a hidden treasure in the traditional sense. You see, it’s not really hidden. I’ve included it here because it’s a part of Paris that isn’t typically recommended to tourists or travellers with a few days in Paris but, having visited it for the first time a couple of weeks ago, I really think it should be.

I’m about halfway through drafting my second book and, although a crucial scene at the end will take place there, I had never visited the Parc de Belleville in the 20th arrondissement. Two weeks ago I hopped on the metro early in the morning and ventured up to the park to suss it out. I was pleasantly surprised.

The park is built on a steep hill and boasts a central staircase up to a pagoda-like museum at the summit. The layout is unlike any other Parisian park I have come across (except maybe this one) – the symmetry and structure of the Luxembourg and Tuileries Gardens is refreshingly absent. This park felt like a park to be conquered. I felt teased by its designers and instantly encouraged to wander through the winding woodland paths that snake backwards and forwards and upwards away from Boulevard de Belleville.

I expect when it opened in 1988 it was a place of pristine beauty. Fountains have been laid out on either side of the central steps and a 100m waterfall flows down through them. When I visited, on a hot September Saturday morning, most of the fountains were switched off and shallow pools of stagnant green water were the only reminders of their potential for glory. But somehow the semi-forgotten state of the ponds and fountains gave the park an extra charm – a feeling that nature could take over if it wanted, that the park could outgrow its designs and become something more exciting. 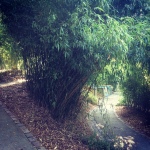 The winding paths up through the park 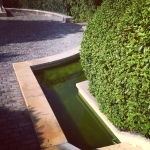 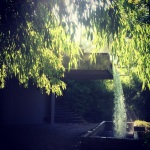 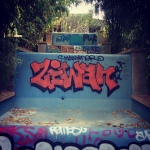 Graffiti along the dry fountain steps

After a few turns through the trees I passed underneath the waterfall – a concrete chute that churned sparkling water out into a metal grate. It felt both natural and unnatural at once. Beyond the grate were steps running down towards the city centre. I expect that when the water features ran to their full ability, the waterfall would have carried on down over these and into a pool at the base. These days, the steps are old and dry and dirty and covered in graffiti.

Once I had passed the waterfall and climbed the rest of the way to the top of the hill I arrived at La Maison de l’Air, a museum dedicated to the issue of air pollution and the environment. It hosts regular exhibitions and is a popular destination for local school groups. The walls around the museum also form the seats for an open air theatre. The Maison was closed when I was there but I was surprised to look up and see people walking around on its roof. I took a staircase up another level and found myself under the Maison’s glass canopies, looking at one of the most spectacular views of Paris I have ever seen.

From the pagoda at the top, you can see the route of the waterfall all the way down to the gates but look up and you can see countless rooftops, chimneys and tower blocks. And that’s why I say the park felt like it needed to be conquered. Like a mountain climb, you get to the top and look out, taking in everything you have left behind you and below you. From here you can see both the Montparnasse and Eiffel Towers, tiny in the distance. I was lucky to experience this with blue skies and bright sunshine. It was breath-taking.

If the view alone is not enough to tempt you, there is also some incredible art on the pillars holding up the canopies. I couldn’t find any information about the paintings so I can’t tell you whether whether they are simply graffiti or an installation of some kind but they are beautiful either way.

If you’ve got a spare couple of hours in Paris and want to do something free, interesting and totally off the tourist track (but still with an opportunity to snap a photo of the Eiffel Tower…) then this is a great spot. 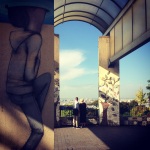 Couple admiring the view above the Maison de l’Air 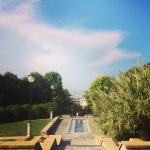 View of the Belleville Park fountains 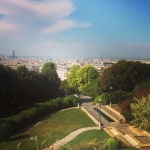 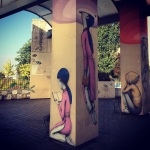 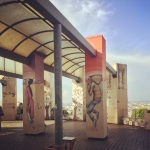 The art and the view 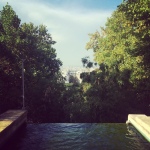 The top of the waterfall

If you’re planning to take a trip to the Parc de Belleville, the nearest metro stations are Couronnes and Belleville. You can find out more about the history of the park and the history of Belleville on the 20th arrondissement’s website.